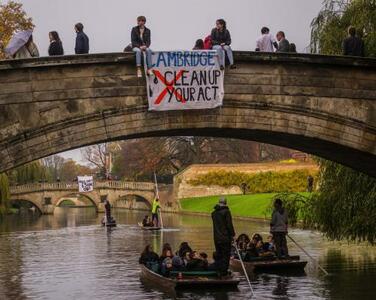 We call on Cambridge University’s Governing Council and Vice-Chancellor Leszek Borysiewicz to:

1. Withdraw all investments from fossil fuel stocks, bonds and investments.

2. Commit not to invest in fossil fuel companies in future.

We make these calls in light of the huge threat posed by climate change to human life and ecosystems, and the power of divestment as a moral and cultural tool to change this. Given the University's huge influence around the world, and its commitment to social and environmental sustainability, divestment is a moral imperative for the University of Cambridge.

Fossil fuel companies’ current reserves of oil, coal and gas hold 5 times more carbon than the world’s atmosphere can safely handle. Their business plan will cause climate chaos for billions of us, yet UK universities still collectively invest £5.2 billion in fossil fuel companies (1).

The University of Cambridge and Colleges have an overall endowment that equates to almost £5 billion (Ibid.). Without an ethical policy (unlike universities such as Oxford, UCL and St. Andrews), this money is invested in companies without consideration of their catastrophic environmental impact. At a global and local level, the impacts of these investments contradict the University’s positive contributions to society, through research and education.

Over the past two years the global divestment movement has shown the very real path to a sustainable, fossil-free future. Regarding fossil fuels, the divestment campaign is the fastest growing climate justice campaign in history. So far, $2.6 trillion has been divested from fossil fuels by 456 institutions (Ibid.).

It is recognised across the world that global temperatures must remain no more than 2°C higher than in pre-industrial times if climate change is not to destroy our entire way of life (Ibid.). For this to happen, study after study has demonstrated that 80% of currently known fossil fuel reserves must remain in the ground (Ibid.). This view is endorsed by mainstream elements of society, from Mark Carney, the governor of the Bank of England, to the United Nations. Companies like BP and Shell – and the University’s investments in them—are not part of a sustainable future, no matter how they, or the University, might pretend otherwise. Small investments in renewables are far outweighed by the catastrophic impacts of continued oil extraction. In universities around this country and the world, divestment is denying these companies their moral acceptability – Cambridge needs to catch up.

In the University’s “Dear World...” Campaign, it has positioned itself as the driving force for a better future. If it wants anyone to respect that, it needs to demonstrate moral leadership and distance itself from the fossil fuel industry. Fortunately, the working group on investment recently set up by the University presents the perfect opportunity, just a month before the historic climate summit in Paris. All moral and financial arguments point to the same thing – divestment from fossil fuels.