University of Glasgow: DIVEST from the Fossil Fuel Industry 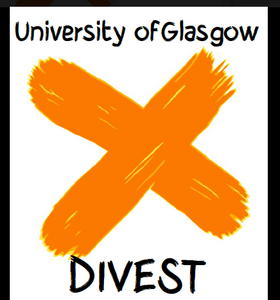 As of 31st July 2012, the University of Glasgow had assets currently valued at least £19 million invested in the fossil fuel industry.

We, the undersigned, call on the University of Glasgow to divest from the fossil fuel industry, and choose a safer future for its students.

Specifically, we call on the university to:

• Make an immediate statement of principle, expressing its intention to divest its holdings in fossil fuel companies within five years
• Immediately stop making new investments in the industry
• Instruct its investment managers to wind down the university’s existing holdings in the fossil fuel industry over five years

The world in which the students of the University of Glasgow are to graduate into is currently threatened by the reality of climate change. Already the world is suffering the effects of 1°C rise in global average temperatures. Last year, Arctic sea-ice cover had retreated to its lowest levels since the beginning of satellite records, and the average global sea level was 1.4in above the 1993-2010 average. The world is experiencing more severe draught, wildfires and flooding, which impact the world's poorest most severely; the World Health Organisation estimates that climate change is causing at least 140,000 deaths per year. The fossil fuel industry is unequivocally driving us towards a global climate crisis, and we will not keep dangerous climate change at bay without halting our extraction of fossil-fuels.

The university has both a moral and a financial duty to its students to withdraw its investments from the fossil fuel industry. The moral case is clear: if it is wrong to wreck the climate, then it is wrong to profit from that wreckage. Furthermore, fossil fuels are a dangerous investment. The value of companies like Shell, BP and Chevron is based on the assumption that they will be able to dig up and sell their fossil fuel reserves. But if the world gets serious about stopping climate change, that would mean keeping 80% of proven fossil fuel reserves in the ground, and the assumption that forms the basis for these companies' value will be undermined.

We call on the University of Glasgow to lead the way on this issue, and protect the future of its students, by divesting from the fossil fuel industry now.

Petition is successful with 1,354 signatures