To: President Steven Franklin and the Board of Governors 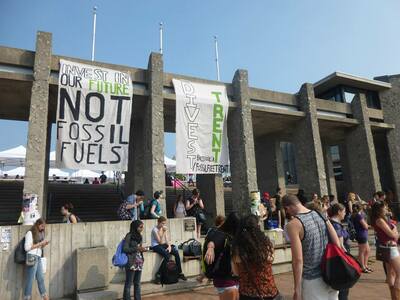 We call on Trent University to immediately freeze any new investment in fossil-fuel companies, and to divest from direct ownership and from any commingled funds that include fossil-fuel public equities and corporate bonds within five years.

We are witnessing the increasing impacts of a warming planet more and more consistently; 2013 was the fourth hottest year in recorded history. There was record-breaking heat, droughts, floods and hurricanes across the globe which impacted hundreds of thousands of people and cost countries hundreds of billions of dollars. In 2013 extreme weather cost Canada $3.2 billion from insurance claims.

Trent University is contributing to this destruction by investing in the fossil fuel industry. This is immoral and unacceptable; especially for a school that prides itself on sustainability, and for a school that has made world breaking research through its Environmental Studies/Science program. Trent University should show leadership by investing in progressive companies that will lead us to a clean energy future.

Scientists agree that global warming caused by humans burning fossil fuels will continue to accelerate and intensify these tragic climate disasters. The scientific consensus is clear and overwhelming; we need to keep at least 80% of known fossil fuel reserves in the ground if we are to stand any chance of avoiding irreversible, catastrophic climate change.

As public pressure to confront climate change builds, we call on Trent University to immediately freeze any new investment in fossil-fuel companies, and to divest from direct ownership and from any commingled funds that include fossil-fuel public equities and corporate bonds within five years. We believe such action on behalf of Trent University will not only be a sound decision for our institution’s financial portfolio and public reputation, but also for the wellbeing of its current and future graduating classes, who deserve the opportunity to graduate with a future not defined by climate chaos.

Sustainable Trent urges Board of Governors to divest from fossil fuels http://trentarthur.ca/sustainable-trent-urges-board-of-governors-to-divest-from-fossil-fuels/

How to Avoid the Carbon Bubble: Divest from Fossil Fuels http://trentarthur.ca/how-to-avoid-the-carbon-bubble-divest-from-fossil-fuels/

Another Look at the Fossil Fuel Divestment Campaign http://trentarthur.ca/another-look-at-the-fossil-fuel-divestment-campaign/

An Update on the Fossil Fuel Divestment Campaign http://trentarthur.ca/an-update-on-the-fossil-fuel-divestment-campaign/

Trent University Should Divest From the Fossil Fuel Industry http://www.mykawartha.com/opinion-story/3716578-trent-university-should-divest-from-the-fossil-fuel-industry/

Trent University Must Divest from the Fossil Fuel Industry http://trentarthur.ca/trent-university-must-divest-from-the-fossil-fuel-industry/