To: The London Pension Fund Authority 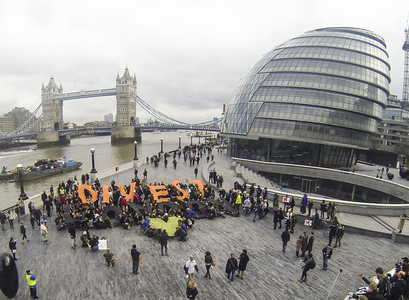 The LPFA should commit to divest (sell its shares) from fossil fuel companies to protect the people of London.

Climate change is the greatest challenge humanity has encountered. Warming in excess of 1.5°C will have catastrophic consequences [1]. In order to have a chance of staying below this temperature rise, 80% of known fossil fuel reserves must not be burnt [2].

The fossil fuel industry currently holds vast carbon reserves which if burnt would result in emissions 5 times larger than what it is deemed to be safe [2]. All available evidence suggests that fossil fuel companies intend to burn the reserves within their control. In addition, companies such as Shell are actively trying to discover new reserves, often in environmentally sensitive regions [3].

If it is wrong to damage the world we live in, then it is wrong to profit from that damage. Responsible investors should no longer be profiting from the destructive activities of these companies.

The London Pension Fund Authority (LPFA) manages the pensions of City Hall employees (including the Mayor of London and the London Assembly) as well as many other local authorities [4]. It manages nearly £5 billion worth of assets, millions of which are direct investments in fossil fuel companies including BHP Billiton, Rio Tinto and Shell [5]. Indirect investments total £54.6 million.

These fossil fuel investments are becoming increasingly risky as the cost of extraction increases and international treaties restrict the use of fossil fuels [2]. Not only does it make moral sense not to invest in the destruction of our planet, it also makes financial sense.

By divesting from fossil fuels, City Hall will join public institutions such as the British Medical Association, Glasgow University and Oxford City Council, amongst many others, in leading by example to help create a sustainable future for the citizens of London and beyond.

1. The London Pensions Fund Authority (LPFA) to:
- Immediately freeze any new investment in fossil fuel companies, including those made by externally managed and pooled funds.
- Offer a fossil free pension option to employees
- Divest from the top 200 companies with the largest known carbon reserves (oil, gas and coal), and shift these funds to lower risk, ethical investments within 5 years

We handed in the petition with over 2000 names to the Chair of the LPFA Board! Check out the press release and photo here: http://gofossilfree.org/uk/press-release/thousands-of-londoners-call-on-public-pension-fund-to-act-on-climate-change/